Puppies, bred by us are sometimes available.

We are located in North Devon, not far from South Molton about thirty minutes from M5 J27.

For training or stud enquires please contact us by email, mobile or land line using details below or use the contact form found on this site.  NB:  It is best not to text as we have very poor signal so can't actually reply via text.

For puppy enquires, please contact us by email using clumsetter@yahoo.co.uk and we will send you an application form to complete giving us all of the information we need to decide whether we can add you to our waiting list. Alternatively, complete the Contact Form found on our Contact page on this site - we will pick that up and send you the application form. 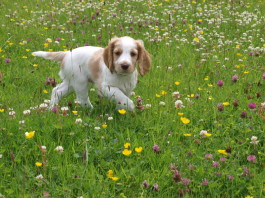 Pippin - Budelegh Golden Snitch By Clumsetter - now all grown up and a proven Clumsetter stud dog!

We are hopeful of several litters between us and Becky, our daughter, in Summer 2021.

If you are interested in joining our waiting list, please contact us, preferably by email or by using the Contact page on this site.  We will send you an application form and we go from there.

Remember to add our email address to your contacts list if you do join the waiting list so you don't inadvertantly miss out on a puppy offer.

We do give preference to working homes as the pups from our litters are always docked, however, the quality of the home is the deciding factor so we are always pleased to hear from people who can offer an active pet or agility home.

Please note, we cannot leave pups in a litter undocked for a variety of reasons.  Please do not ask us to do so.  If you are looking for an undocked pup it might be best to look for other breeders.  Sorry.

By the way, we do not have a very good mobile signal so if you want to chat to us it is best to use the land line number given above. 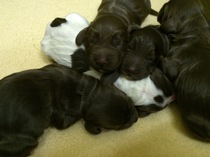 He is Lemon and White (more Gold than Lemon really) and has turned into a very handsome boy indeed.  Pippin took up his Stud duties in June 2015 and his first litter was born early in August 2015.  Since then, he has sired further litters.  Colous so far have been Gold, lemon, lemon and white, chocolate, chocolate and tan and chocolate and white.

Pip is now proven to carry the tan gene.

Pip is a fabulous working dog who has now been promoted to first dog having been out throughout the 2015/2016 shooting season.  Jaw droppingly good!

Pip is a loving, affectionate boy, medium sized and not too chunky.  Like all of our dogs, his temperament is never in question.

Pippin is hereditary clear for both FN and PRCD Mutation for PRA and has been DNA tested Normal for AMS. 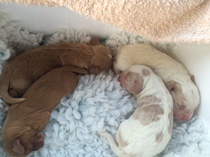